The Chassahowitzka river paddle trip is a open river at the launch, but it has several natural springs that we go visit that are in tighter, more secluded sections of the river.  It has very diverse scenery with palms, cypress, oaks and grass flats.  We sometimes see river otter and manatee on it.  This is a good one to wear a bathing suit in case you want to jump into the spring to cool off at the “crack”.

The threats of bad weather chased a few paddlers off, but the storm came early overnight and was all done by the time we paddled. The Chassahowitzka was beautiful. Quite a few Sleepy Manatees around the head spring. Lunch at the crack was peaceful, with not a lot of traffic on the river today. There was wake of turkey vultures sleeping in the trees, a pod of pelicans floating in the river (seen later on the trip roosting in a tree), and an Osprey circled the group as we paddled down the main river. We here off the water in time to make it home for the big game. Hope everyone had a good time on the water with us. Thank you all for coming out and enjoying this wonderful river with us. 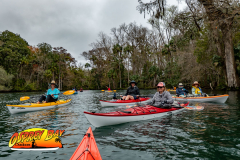 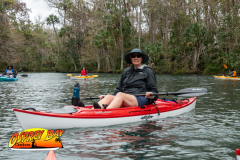 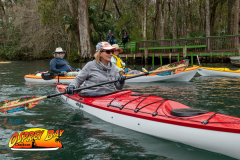 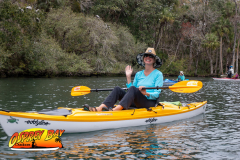 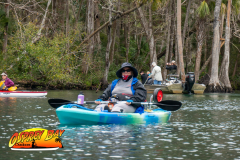 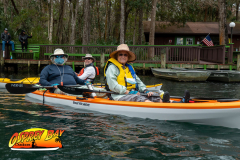 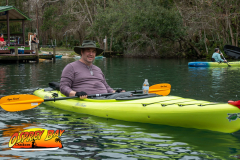 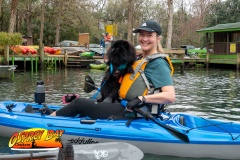 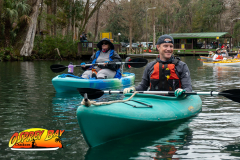 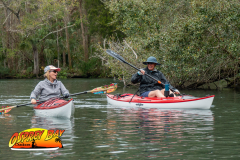 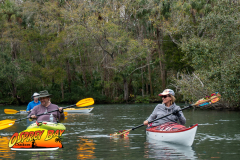 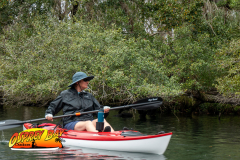 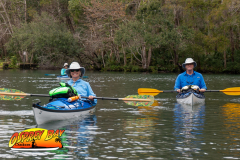 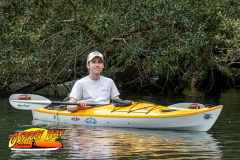 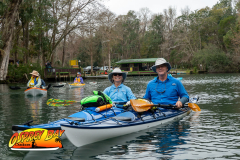 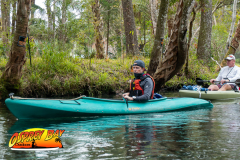 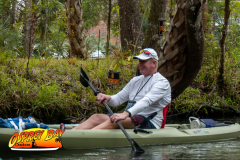 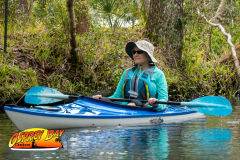 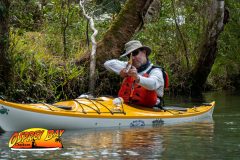 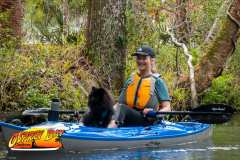 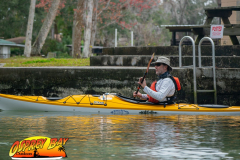 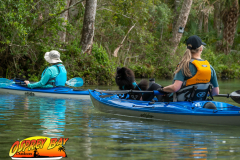 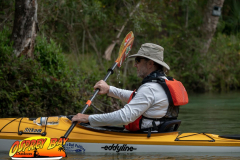 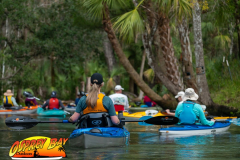 The Chassahowitzka River is a spring-fed river located in southwestern Citrus County, Florida. The 5-mile-long (8 km)[1] river is home to hundreds of species of birds including the bald eagle, and is a common refuge for the West Indian manatee. In 1941, approximately 31,000 acres (13,000 ha) of its saltwater creeks, freshwater tributaries, and hardwood hammocks were recognized as Chassahowitzka National Wildlife Refuge. It is accessible by boat from a nearby public boat ramp that is located at the campground that also bears its Indian name which means “land of hanging pumpkins;” a reference to a wild variety that once grew along the banks.

The headwater of the river is Chassahowitzka Spring, a first magnitude spring which is visible from the campground dock.  A group of smaller sister springs are located in a creek just up from the main vent. Several of these sister springs are connected via underwater caves that snorkelers can dive through while holding their breath. Great care must be taken when diving through these caves, there have been at least 4 drownings in the underwater tunnels and caves since 1989, the most recent being in 2011. Similar freshwater tributaries feed into the Chassahowitzka River further downstream, some of which mix with salt water as the river weaves its way toward the Gulf, creating brackish creeks and bays where it is quite common to catch fish species such as spotted seatrout, redfish, or common snook to name just a few. Other staples of the river include striped mullet, which can be seen in schools through the clear water or at times leaping out of the water, and the blue crab which is often netted or trapped by local fishermen. It is very common to see several species of herons and egrets, including the great blue heron and the occasional large alligator, although they are often seen some distance from springs and boats. The river is well known for its navigational hazards, mainly due to large rocks hidden from the sight of fast-moving motorboats that venture outside the narrow channel.

The word “chassahowitzka” means place of hanging pumpkins” So come on and Hang out. Go camping, canoeing, kayaking, rent a boat or bring your own. You can also enjoy and Eco Tour, Airboat Ride or Guided fishing charter.  Right away, you notice the amphitheater acoustics and swirling afternoon breezes about the lagoon. Except for the docking and grassy  areas surrounding the Nature Coast Outpost kayak rental and campground store, banks bristle and sweep with dense jungle foliage, old   cypress trees keep company with large oaks and crowding wetland trees clamoring at their knees. From heavy under-story to lofty canopy, this is every bit of a rain forest. Vines, thick as an alligator’s tail snake up trunks and tug limbs earthward. As palms trees slowly fall and rotate into the primordial tannic tea of the Chaz, a sense of renewal pervades the timeless jungle. Paddle downriver a hundred yards or so, around the bend and the river begins to direct you toward miles of unknown country, opening toward expansive skies and distant western horizons. Most kayakers glide furtively along the overgrown banks, through tree root arcs, mazes of cypress knees, half-digested logs, and giant ferns poking out from the shoreline. Every once in a while, you’ll get to explore a mat of water lilies or find a secret little sandy spot, a bubbling spring where your hand slips into the loose sand up to your elbow. As shallow tides tug and push, river grass beds lay down to the flow. Here and there trails lead back into the deep dark jungle. Only the hardiest follow them, most prefer to experience the glory of the “Chaz” by water. Here you have to time the tides so you don’t get stuck on the spring’s side of a fallen tree, having floated over it easily on the way in. Then there are the animals. Manatee roll and dolphins hunt fish; you can see it just about anywhere. These plus size mammals and fish even like to frequent the lagoon in front of the campground’s store, along with otters, all slightly playful around humans. Birders love the “Chaz” too. From the constant interloping buzzards which often greet the day hoping to catch a morsel from a careless fisherman to the Red Shouldered Hawks and Hummingbirds and Herons, the skies and canopies are full of foul just as curious about you as you will be about them. Maybe you’ll spy a ruckus in the underbrush of pigs only to realize it’s a Gopher Tortoise bulldozing, trailblazing through palmettos and sand. Maybe you’ll hear the unmistakable rat-a-tat-tat of a Giant Red Cockaded Woodpecker with his mate. Maybe a ten foot long reptile will unnerve you just a bit. As you paddle toward the Gulf of Mexico, a couple miles out the environment starts to change dramatically. Views open expansively, dominated by Saw grass, punctuated sparsely by hardwood hammocks, creating an ever changing visual scene where distant forests are passed in perspective by those in the foreground. It may all look similar when you’re lost but I assure you, a little change in perspective or speed or tide can be deceptive. Oyster bars and Mudflats and knobby Limestone earth hide a million little creatures hurrying out of sight as you approach. If you’re very sneaky, you might catch a crab; if you’re very observant you might find a Crab Spider with the trademark smiling face on its back nesting smack dab in the middle of an exquisitely crafted web. Sometime a few years back the State of Florida installed a dock and boardwalk and solar powered bathroom on an island about three miles out called Dog Island. They maintain it well and it is a welcome afternoon layover for the kayaker pacing him or herself on their journey. Out here, you might stumble across a fisherman angling for Bass on a tributary, then round a corner and spot find someone hooking up with  a Redfish or Seatrout. Salt and Freshwater environments mingle according to tides. Six miles away from the launch point, you’ll find yourself on the flats where the depth of the Gulf of Mexico drops one foot for every mile  traveled to the west, as a general rule. It’s not good for large vessels but it is one of the richest fisheries in the world. The flyfishing world record for Tarpon has been set twice just off Chassahowitzka Point. If you’ve never hooked one of these big old boys you should try it. It’s like hooking a car. Hold on. Go fishing with one of our fishing charters or fishing guides.  The Chazzahowitzka River is just one of many beautiful rivers to explore in this area. It has to be experienced to be understood. So come on over and gain some understanding of the natural beauty of these springs that make the river what it is.