The Homosassa river paddle trip takes us on a very wide-open river with many restaurants along its banks.  After launching, we will briefly stop by Monkey Island for some pictures of the cute playful monkeys.  Then, we head upriver towards the main spring and the manatee preserve.  The water becomes very clear as we near the head spring, making it easier to an abundance of manatee hanging out.  We then head back down river for a stop at a favorite restaurant for a bite to eat and refreshments. 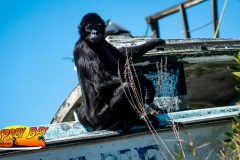 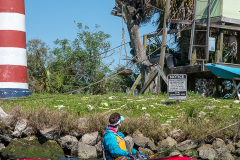 Homosassa River is a 7.7-mile-long river in Citrus County, Florida, in the western part of the state. Its headwaters are the Homosassa Springs, and from there it flows west into the Gulf of Mexico. The river is home to common bottlenose dolphins, West Indian manatees, alligator snapping turtles, nine-banded armadillos, snakes, birds, eastern box turtles, oysters, raccoons, American alligators, Virginia opossums, North American river otters and many species of both freshwater and saltwater fish. The Homosassa River is an estuary, which means that as it moves inland, it changes from salt water to fresh very gradually, and the river is brackish. The river is good for canoeing and kayaking.

Monkey Island sits in the middle of the Homosassa river and is inhabited year-round by a small family of monkeys. The island is owned by The Homosassa Riverside Resort. They care for the monkeys and feed them regularly. You can get an up-close look from a boat and take pictures or you can see Monkey Island from the resort grounds. You can also see the island from the public boat ramp next to MacRae’s but you’ll need binoculars to view the monkeys from there.

Story has it that G.A. (Furgy) Furgason, also known as “Mr. Homosassa” because of his planning and directing of much of the areas surroundings, worked 36 years with Bruce A. Norris of the Norris Cattle Company until his retirement in 1983. They negotiated deals to buy the land where the Yardarm Lounge, the Riverside Resort and the Riverside Crab House, the Wildlife Park, the Crow’s Nest, Sugarmill Woods, and Riverhaven Village now sit.

Mr. Furgason said he ran into the late Dr. John N. Hamlet in Rapid City and convinced the naturalist to come to Florida. Upon his arrival, Dr. Hamlet was hired by Weekie Wachee as a naturalist and subsequently was hired by Furgy. Dr. Hamlet had captured monkeys and brought them to America where they were used to perfect the polio vaccine.

Monkey Island was just a pile of rocks in the 1960’s that took the bottoms right out of boats during high tide. Furgy went to Africa on Norris Cattle business leaving instructions for the dragline operator, working for him on the Crow’s Nest, “pull some dirt around those rocks so the boaters can see it better”. When he got back to Homosassa, the dragline operator had piled so much dirt and rocks up that he had succeeded in building a barren island right outside the Yardarm.

Having no idea what to do with this horrible eyesore, he decided to build a lighthouse on it. He then started thinking about the monkeys along the canal at the Attraction. There were some that were rather difficult, always escaping and getting into visitors’ cars, stealing candy and biting tourists. He said he had often thought of sending them to Alcatraz and decided the island would be perfect. He put three spider monkeys and two squirrel monkeys on the island with some huts and some trees.

The first island monkeys lasted 12 years before they began to die and were replaced with younger monkeys. The island turned out to be a big attraction for the visitors and became known as Monkey Island.

Palm trees were planted but the monkeys kept eating the palm hearts, which caused the trees to die. Cedars replaced them and prospered.

Today there are five spider monkeys on the island. There is Ralph, the alpha male, Sassy, the matriarch and Ebony, their offspring plus two of the newest female adoptions of Eve and Emily. The two squirrel monkeys, Tiny and Tim, died of old age in 2003. New houses, play toys and enhancement features are always being added for their amusement. Visitors to our river are a constant source of entertainment for the monkey family.

Even though the ownership of the property with island has changed over the years, the monkeys have always been under the care of the owners. The monkeys are fed twice a day from a menu designed specifically for them and consisting of green leafy vegetables, bananas, oranges, sweet potatoes, raw peanuts and monkey chow.

They remain on the island because they prefer not to swim and the river acts as a natual barrier. Today they still delight the Yardarm and hotel guests with their playful antics