We paddle up the cypress tree lined river to another park for a picnic lunch before heading back.  It has tannic water with many down logs around it’s bank.  This provides great spots for turtles soaking up the sun.  It is the best of old Florida with its beautiful cypress trees and knees. 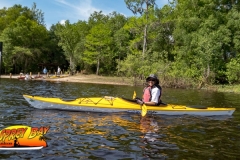 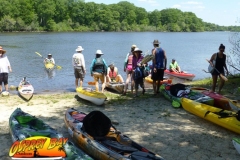 The Withlacoochee River in Florida is one of the very few Rivers in the world that flow south to north. It is a pristine river with wonderful views of Cypress trees and an abundance of wildlife. You will see Eagles, Osprey, Hawks, King Fishers, Alligators, Turtles and much more. It is also a great River to catch Bass, Specs, Stump Knockers and Catfish.

The Withlacoochee River originates in central Florida’s Green Swamp just east of Polk City. It flows west, then north, and then turns northwest and finally west again before it empties into the Gulf of Mexico in Yankeetown. The river is 141 miles long and has a drainage basin of 1,170 square miles. Some say it was named after the Withlacoochee River in northern Florida or an old Indian saying (Deep and Dark). Along its route are the 46-mile-long Withlacoochee State Trail which is the longest paved rail trail in the state of Florida,  The Cypress Lake Preserve, a 324-acre park with about 600 feet of river frontage, and Nobleton Wayside Park, a 2- acre park in Nobleton Florida that includes a viewing area, a boat ramp, basketball court, and picnic tables.

The Withlacoochee River flows through Pasco County and Hernando County, and then forms part of the boundary between Hernando County and Sumter County, and the entire boundary between Citrus County and Sumter County, between Citrus County and Marion County in Dunnellon where it merges with the Rainbow River. It flows through Citrus County and Levy County in Inglis to feed Lake Rousseau (a man made 3,657-acre lake). The lake was created in the  1920s when the river was dammed. The river reforms to empty into the Gulf of Mexico at the end of the highway 40 in Yankeetown. The Withlacoochee is truly a site to see.