The Myakka River paddle trip is a trip on a river loaded with gators.  We launch at the lake and head over the damn into the winding grass flats of the river.  Lunch is provided in a nice shady spot before heading back.  You will want to have your camera ready, but swimming is not recommended on this one. 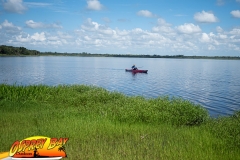 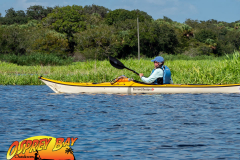 The majestic Myakka River flows through 58 square miles of one of Florida’s oldest and largest parks.  In a scene reminiscent of what early Native Americans and Spanish explorers witnessed, arching palm trees and live oaks reflect on a winding tea-colored stream. The cries of limpkins and osprey pierce the air while alligators and turtles sun lazily on logs and riverbanks. This is the Myakka River, Florida’s first state-designated wild and scenic river, and it flows through a vast expanse of unspoiled wetlands, prairies, hammocks, and pinelands that make up Myakka River State Park. Boating, fishing, canoeing and kayaking are popular activities on the water while hikers and bicyclists explore miles of trails and backroads.

The Myakka River is a significantly diverse dark water river approximately 60 miles in length just off the gulf coast of southwest Florida. Due to strong citizen interest in preservation of it’s pristine nature and scenic qualities, the Myakka River was declared a ‘Wild and Scenic River’ by the Florida State Legislature in 1985. Only two rivers in the state are recognized and privileged with this ‘Wild and Scenic’ level of special state protection.

The majority of the Myakka Rivers’ watershed is provided north of Sarasota County. The river becomes well defined as it enters the county, converging from numerous tributaries. Two large lakes and an extensive marsh system mark it’s course into and through the Myakka River State Park. The lake and marsh areas together form an elongated basin that is famous for it’s diverse wildlife. Alligators and wading birds are present year-round. Many exotic species of waterfowl are found in the winter months. South of State Road 72 is a 7000-acre area which includes the lower lake that is known as the Wilderness Preserve.

Below the lake the Myakka River courses through several miles through a narrow, serpentine channel bordered with sprawling branches of live oaks heavy with spanish moss. The oaks are complimented with the graceful arching trunks of sabal palm trees. This segment features miles of solitude and undisturbed banks. Approximately five miles south of the lower lake a privately-owned dam prevents access from the south during all but extremely high-water level periods. Some areas in this section may be shallow enough during winter and spring to require fording and pushing of canoes and kayaks for short distances.