The Weedon Island Paddling Trip follows through the kayak trail in a delightful 4 mile paddle in and out of mangrove tunnels.   The trail is clearly marked with signs, but we might just get a little lost on purpose.  The Weedon Island park is a 1,500 acre preserve in St. Petersburg, Fl.  and offers hiking trails, boardwalks, docks, picnic tables and a lookout tower.   There is a long floating dock and beach area for easy launching.  This is a great paddle for some shade and to check out the cool black mangrove crabs.  We usually stop at a sandbar for a swim and some lunch. 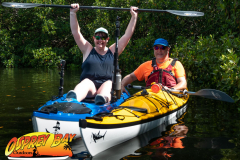 Weedon Island Preserve is an expansive 3,190-acre natural area located on Tampa Bay. This coastal system, comprised of aquatic and upland ecosystems, is home to numerous species of native plants and animals, an educational facility and a rich cultural history. Indigenous peoples occupied this site for thousands of years. Today, the preserve protects this wide diversity of natural and cultural resources for current and future generations. Weedon Island Preserve is also a well-known birding and

Weedon Island is located in Pinellas County, Florida, United States. It is located within the Weedon Island Preserve, in the northern portion of the city of St. Petersburg, on the western coast of Old Tampa Bay. Weedon Island is archaeologically significant as it serves as a type-site for the Weeden Island Culture. Weedon Island is named for its early owner Dr. Leslie Weedon.  Former confederate soldier Captain W. B. Henderson purchased the land that was to become Weedon Island in 1886 with war bonds. When Captain Henderson’s daughter Blanche married Dr. Leslie Weedon in 1898, the Captain gave the new couple the Island as a wedding present. Weedon Island was only an island in high tide and during low tide it was connected to the peninsula. Leslie Weedon and his family spent the weekends here from nearby Tampa. At that time there was no bridges across Tampa Bay so they traveled here with their belongings by boat and brought everything back home for the week days

In 1960, a temporary salt water conversion plant was built here by Progress Energy, Cornell University and the federal government which operated for four years and made 35,000–50,000 gallons of fresh water a day.[4] In 1970 the Greek Oil Tanker Dellan Apollon almost ran aground while trying to dock at the power plant on the island. By the early 1970s the last commercial landowners had sold the land, showing there was no future for commercial development and only the energy facility was left alone and the rest of the island was converted to a nature preserve. On March 25, 2000 on a clear day a helicopter was returning from St. Joseph’s Hospital in Tampa and hit a radio tower guy wire and crashed into the mangroves on the island with all three people on board died.  Today the island is a preserve.